For example, if the player was dealt a ten of hearts, a jack of hearts, a joker, a king of hearts, and an ace of hearts in their first hand, the joker could be used as a substitution for the queen of hearts. This means that the player would actually have a royal flush. One can imagine that the joker plays a large role in this game for making winning hands as it can literally be any card in the deck that it needs to be in order for the player to get the best hand on any given deal.

Joker Poker Multihand is set up like many other multihand poker games. In this particular Joker Poker Multihand by Realtime, there is a simple black background with the words joker poker in bright neon blue lights. The joker, complete with multi-coloured face paint and a midlevel jester’s hat is grinning in the top right corner. Below that is a sign that says multihand along with the number of poker hands that the player is playing. Under that, the player can adjust their bet to either one cent, five cents, twenty five cents, fifty cents or one dollar.

At the bottom of the screen, the player can see a paytable that gives out the different payout information for the game, and below that there is a red cashout button. To the right of that there is a bet one button. The player can push this up to five times before it resets back to one. To the right of that is the deal button. Once the player pushes the deal button, they are dealt their five cards and no more betting can be made. The max bet button is to the right of that. If the player pushes the max bet button, they will bet the maximum amount allowed per round and will then automatically be dealt a hand of cards. 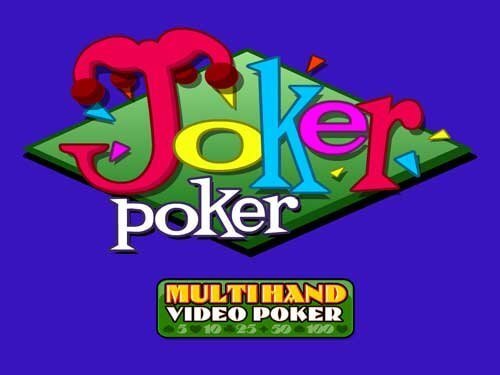 The object of the game is to make the best poker hand possible, but the game only starts paying back to the player if they have kings or better.

In Joker Poker Multihand, the payouts depend on the hand that the player manages to make by holding cards and taking new cards on the draw. The least to most valuable hands in this game are kings or better, two pair, three of a kind, straight, a flush, four of a kind, a straight flush, a royal flush with a joker, five of a kind, a royal flush and a sequential royal.

A sequential royal is the highest payout a player can get from Joker Poker Multihand and pays bet times twenty thousand. The lowest hand, kings or better, pays ten times five.