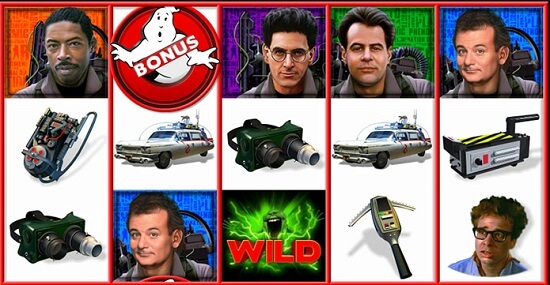 Ghostbusters is an IGT online slots games that has five reels, thirty pay lines, bonus rounds and progressive jackpots. A minimum of twenty credits is required to enable a single pay line and each spin needs a minimum of fifty credits to spin the reels. The game is powered by International Game Technology who are world leaders in developing gaming software and system designs.

The iconic film from the 80’s, Ghostbusters, is the theme for this online casino slots game. It is action packed full of graphics, animations and sound effects that bring the theme to life. Slimer is the featured character who comically narrates as the game unfolds, he teases and mocks as multipliers, credits and other prizes are awarded. Some wins will result in the showing of a famous clip from the film.

At certain random moments throughout the game the marshmallow man sweeps across the screen leaving a trail of wild symbols behind him. The iconic characters Winston Zeddmore, Egon Spengler, Dr Peter Venkman, Raymond Stantz and Louis Tully as well as Slimer, the marshmallow man, the car, various traps that were used and the proton packs are all featured on the reels. There are no playing card symbols that are usually found on slots reels but the standard sevens symbol is available. The Ghostbusters theme song plays as the reels spin. The librarian’s shrieks and real voice recordings from the stars of the film can be heard throughout the game. 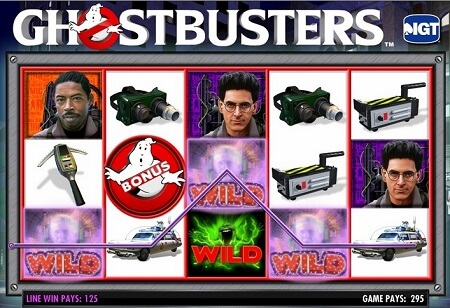 The Ballroom Buster bonus round is triggered when the scatter symbols land on reels two and three with a Slimer symbol on the fourth reel. The bonus game is played with a proton pack firing at a bunch of Slimer’s positioned around the ballroom. Five attempts are allowed to capture the Slimer’s and they will each award various credit amounts and cash prizes with some offering multipliers.

The Stay Puft bonus round triggers eight free spins and sees pieces of marshmallows falling from above. The Ghostbuster scatter symbols need to land on the second and third reels with a Stay Puft symbol on the fourth to trigger this bonus round. When a piece of a marshmallow lands on any of the symbols on the reels, they become sticky wild multipliers. They then pay twice the amount when used in any winning combination.

The Ghostbusters Cash Award feature first shows Slimer performing a funny animation before he begins offering various multipliers. During this round the wild symbols appear more frequently and can transform normal symbols in wilds if they appear alongside them on an edge or corner of the reels. One to three of the reels can possibly become wild reels.

The Psychic and Paranormal Pick Features