Holland Casino is the legal monopoly of casinos located across the Netherlands. There are fourteen separate branches, all of which are known to hold a high level of quality and professionalism. As of 2015, they represented the only means by which to gamble in the country, after which online gambling was legalised, opening up a vibrant new online industry. The physical casinos still remain highly popular, and are known to generate a combined three hundred million euros of revenue on a yearly basis. Each branch varies in the services it offers, but a gambling area, number of eating venues, and entertainment facilities can be expected as standard.

Each branch of Holland Casino offers gambling and casino games based on popularity, and so there is no standard set of games offered at each. The institute is well known, however, to have a very broad selection of games that appeal to a wide audience. The expected range of slot machines, as well as the ever popular roulette, blackjack, and poker are available in almost all branches, while some less mainstream games make an appearance at some branches. Punto Banco can be seen in some branches, as well as Sic Bo, Caribbean Stud Poker, French roulette, and more. If looking for a specific game, it can be tracked down by the casinos website. 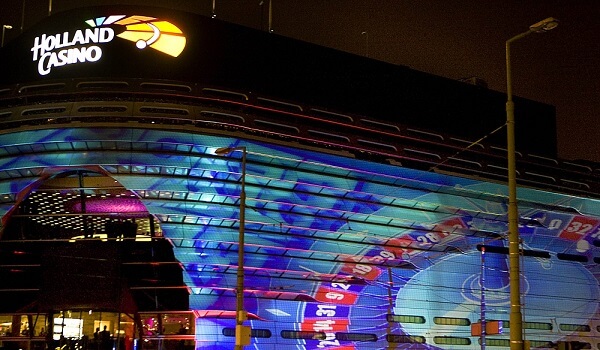 The legally accepted and regulated percentage for slot machine payouts is eighty percent, but the Holland Casino monopoly is well known to have a ninety three percent average payout rate on its slot machines. This decision by the casino franchise got global attention, and put a spotlight on other casino franchises that have opted to have lower payout percentages. The high payout rate is one of the many reasons that gambling in the Netherlands is highly popular, and often sees foreign gamblers travelling great distances to take advantage. Note that the slot machines used are also regularly scrutinised by an independent company, ensuring that the payout rate is maintained.

As a measure to prevent compulsive and destructive gambling, Casino Holland has many policies in place. These policies aim to help players, and assist any that may partake in potentially dangerous or questionable gambling habits. Although Holland Casino has stated that they can only help as much as is possible, the franchise still received an award in London, 2008, for being the world’s most socially responsible gambling institution. The prestigious award, as well as the generous payout policies, set the institute apart and made it synonymous for trustworthy and reliable gambling.

With online gambling finally becoming legal in the Netherlands as of 2015, the country now boasts an extremely popular and ever growing digital gambling scene. New websites open on almost a daily basis, with many more planned for the future. Notably Netherlands was a late adopter of legal online gambling, and many have speculated on how this will affect the real world gambling scene in the country, as well as the notoriously thriving tourism industry. What effects actually occur remain to be seen as time draws on.